Me – That seems like a ‘and they lived happily ever after’ kind of movie. I like it

Better Half – Really? I don’t think it was happy every after for ‘Aarfa’

Me – They have tried to do that , haven’t they? She goes back to wrestling and is pregnant at the end of the movie

Better Half – But she did not win the Olympic gold which she always wanted. I am sure it was not a happy ending for her

Me ( trying to defend ) – True, but did you notice her father’s reaction when she tells him about the pregnancy? Her father wanted her to focus on the medal. That shows a different picture doesn’t it?

Better half (begrudgingly) – May be.

Me (sensing a victory) –  If you notice, she was the main character in the movie. The whole story takes place because of her. Just like Ramayan and Mahabharat

Better half (with a great smile) – And you think it was ‘happily ever after for Sita’ ?

Me (not sure what to expect next) – I guess. Wasn’t it? ( trying hard to remember the Ramayan story)

Better half – Ram’s exile ended but Sita’s didn’t . She had to walk through fire to prove her purity. She had to go away in exile again while pregnant and raise 2 kids on her own in difficult conditions and finally she was swallowed by earth. Where is the happy ending in that!

Me (stunned and speechless)

Another attempt at a short story

Title – You, me and the classmate!

‘Who the hell is he and what the hell is he talking about? ’ asked a fellow student sitting next to her
‘No clue!’ She answered… She actually did not have any clue!!
How the hell she was supposed to know? This was just the first day both of them were in that classroom. So she just said ‘No Clue!’

‘How the hell do you tolerate him?’ asked one of her classmates.
‘No Clue!’ she answered. She actually did not have a clue. It was just few days since she started knowing him as a fellow student. He kept reminding her of someone from her past. May be that kept her from giving up on him. But for all said and done, she really did not have any clue. So again she just said – ‘No Clue’

‘Hey, he is actually a nice person once you get to know him…’ someone said after one semester of college.
‘May be…’ She said. That’s all she could say. She herself was not sure if she still knew him well. Everyday there were surprises; some pleasant and some not so pleasant!! So she just said ‘May be…’

‘He is a great friend to have… Guess you were the only one who knew the real him’ said one of their common friends. ‘Initially we were really convinced that you were out of your mind to be friends him’ – That friend continued

She smiled….. She could not say what she really wanted to say but if she had this is what it would be

‘That’s true! Who in their right mind decides to attend college with their husband as their classmate. That too after just 1 and half year of marriage!! I always knew that great friend you talked about and I am just getting to know that classmate of yours!!’ 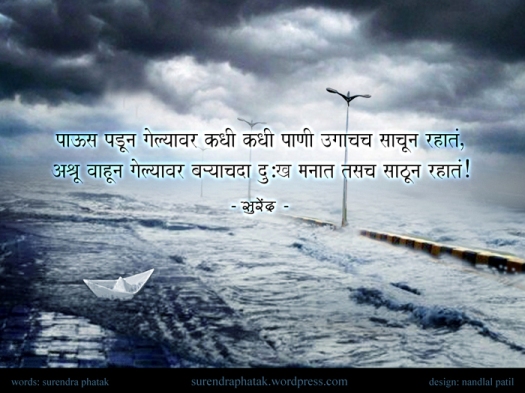 A different and poetic take on Ramayan on the background of recent events in Delhi. A hindi poem which tries to analyse the social causes behind the Delhi Rape Incidence. The poem uses ‘Ramayan’ as a context to draw parallels with today’s societal scenario.