I am from the Tendulkar generation, if you do not believe me then please read this.

Most of my young and adult life has been punctuated by Tendulkar memories, you can read  this master piece tribute by sidvee

If you want further proof of me being a Tendulkar fan, then I can tell you that I have even written a poem on Tendulkar.

Having said that, I for one am least interested to read Tendulkar’s autobiography 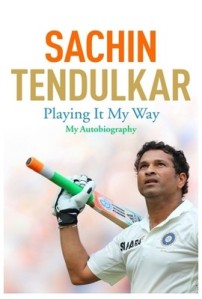 1 – I am a fan of Tendulkar as a cricketer, I was never and will never be interested in knowing Tendulkar off-field. I do not want to know that potentially he was as ordinary in personal life as I am 🙂

3 – The Tendulkar that I worshiped was a humble middle class boy who went on to create history. The Tendulkar I worshiped would never have released an autobiography or created a big media buzz for marketing it. God did not write his own stories, he left it to others to tell those stories.

4 – There are things you worth knowing and then there are things better left un-explained. I never wanted to know that Lance Armstrong cheated, similarly I do not want to know that Tendulkar like all of us had petty issues and problems.For the love of god, He is ‘God’

5 – Tendulkar is no Kardashian and I do not want to know the details of his life. I do not want to know if he likes duck or hates chicken. For the record I went to Tendulkar’s (the restaurant) and hated the menu which included things Tendulkar likes. Just did not make sense to me. I liked his straight drive, cover drive but not his meal choices.

It might come as a surprise to many of you who know me, but I hate the fact that Tendulkar has behaved like the highly paid footballers who release autobiographies at the age of 30 and the again at 40 and then again at 50. I have defended Tendulkar in various debates but I am not sure if I will be able to defend this.

To be frank, I am worried. Since retirement Tendulkar has been in politics, in publishing.. what next? In Bigg Boss? Who knows !!

One thing for sure – ‘that’ Tendulkar will not be the Tendulkar that I worshiped for years.